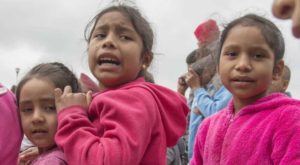 Children coming to our nation for safety and protection are still dying at our southern border while in U.S. detention.

Carlos, a 16-year-old youth from Guatemala, died May 20 in the custody of the Department of Homeland Security (DHS) Customs and Border Protection (CBP). Wilmer, a 2-year-old, died May 14, also in the custody of CBP. They were preceded in death by Jackelin, Felipe, Juan and a 10-year-old girl from El Salvador who died in September 2018 but whose death has just been disclosed. One year ago, Claudia Patricia Gómez González, a 20-year-old woman from Guatemala, was shot in the head and killed by a Border Patrol agent while seeking safety in the United States.

I am deeply dismayed by the deaths of these children, made in the image of God, who came to our southern border as refugees and asylum seekers to ask us for protection. As a nation we denied them that safety, instead placing them in detention facilities, sometimes for months.

Our nation and its leaders have moral and legal obligations on behalf of those who seek safety in our land. As Congress considers federal funding for DHS, we advocate against further funds for immigration detention, deportation, and border militarization, and oppose intentional policy choices that harm children and families.

We follow a Lord who instructed, “Let the little children come to me, and do not stop them; for it is to such as these that the kingdom of heaven belongs” (Matthew 19:14). As we continue to serve and love our neighbor, we pray for the well-being of children and families in detention, and we urge the presidential administration to seek alternatives to the detention of children.