A Tale of Two Fees 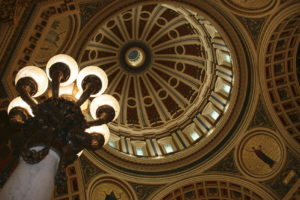 Shortly after passage of HB 1950 out of committee, LAMPa Director Amy Reumann explained why this proposal was inadequate.  Despite nearly 100 possible amendments, HB 1950 passed the House relatively unchanged.  In short, the House fee is too low (only 1% of a well’s estimated life-time revenue) to account for the various impacts, both environmental and socio-economic, of the drilling.  Additionally, regulations included in HB 1950 would limit the authority of municipalities, who have already been dealing  with the effects of drilling on their own for over three years.

Unfortunately, the Senate’s version is not much better.  SB 1100 would allow municipalities to pass whatever regulations they would like.  However, if such rules are more stringent than a to-be-adopted statewide model ordinance, municipalities would not be eligible to receive impact fee money.  The overall fee is higher (2.2% instead of just 1%), and the fee would be collected by the state.  This is in contrast to the House version, which would allow each county to decide if it wants to collect a fee.  The bills also differ in the percentage the state would receive.  The House gives the state 25% of the fee; the Senate gives  45%.  In either case, the state’s portion of the revenue would go towards the Department of Environmental Protection (DEP), PennDOT, the Pennsylvania Emergency Management Agency (PEMA), and other departments/agencies that will deal directly with drilling impacts.

Although SB1100 leaves much to be desired, we are thrilled to announce that the Senate Impact Fee will fund a long-standing LAMPa priority, the State Housing Trust Fund!  The trust fund will receive $2.5 million the first year of the fee, and $5 million each year after.  All monies will flow through the Pennsylvania Housing Finance Agency, which – upon passage of the legislation – would be able to float a bond so that areas that need affordable housing immediately will be able to get started right away!  Please read more about the housing impact of Impact Fee legislation from our partners at the Housing Alliance of Pennsylvania by clicking here.  From their blog, you can contact your Representative and Senator directly.